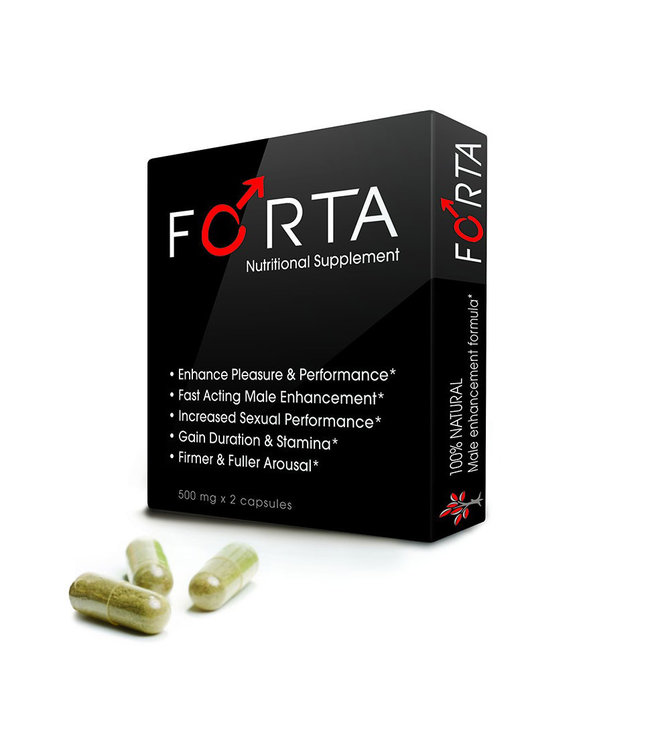 Forta for men is a fast acting natural sexual enhancement supplement that makes the most of your natural potential. Once Forta has been injested an erection usually arises within 45 minutes. Each package of Forta for men is made in Canada with only the pu Read more..

Forta Natural Male Performance Enhancer. Forta for men is a fast acting natural sexual enhancement supplement that makes the most of your natural potential. Once Forta has been injested an erection usually arises within 45 minutes. Each package of Forta for men is made in Canada with only the purest 100% natural ingredients, and is non-habit forming.

Who it’s for: Forta for Men was developed for men dealing with impotence, premature ejaculation, and functional barriers of erection, and low libido. Forta has also been known to increase the size and volume of the vital organ.

Ingredients:
Epimidium Brevicornum - In Asia, the leaves have been used for treating fatigue and fortifying sex drive since the 16th century. This is a time tested aphrodisiac that increases libido and improves erectile function in men.

Panax Ginseng - This is considered the most revered of all aphrodisiacs. This ingredient has been used for centuries to ease fatigue and fortify sexual vitality. Research has shown that ginseng contains a group of compounds known as ginsenosides that have been proven to strengthen libido and performance. One of the ginsenoside components has been found to be responsible for assisting penile erection by directly inducing the vasodilatation and relaxation of the corpus cavernosum.

Lycium Barbarum - This is a famous Chinese medicine has been traditionally used for boosting longevity, building strength, increasing sexual potency, and has been used as a fortified sexual tonic. It is believed to increase sex drive by increasing the production of testosterone, and sperm.

Cinnamomum Cassia -This is commonly used in traditional Chinese medicine, and is considered one of the 50 fundamental Herbs. Several studies suggest that cinnamon may have a regulatory effect on blood sugars, and it also has an anti-clotting effect which in turn helps improve the overall blood flow in the body. It is also believed to increase energy and vitality as well.

Recommended Use: Take 1-2 capsules with a glass of water at least 45 to 60 minutes prior to any sexual activity. For best results take 2 hours after a meal. Do not exceed the recommended dose and do not repeat within a 24hr period.If it is your first time taking Forta for Men, it is suggested that you take 2 capsules. This will allow you to feel the full effect of Forta, and it is the ideal way of introducing the natural blend of herbs to your system. One capsule should be sufficient for future dosages. As with any supplement, speak to your doctor to see if this product is right for you.

Forta for men is a fast acting natural sexual enhancement supplement that makes the most of your nat..